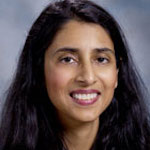 Dr. Anuja Jhingran earned her M.D. at Texas Tech University in 1988, followed by residency training at Baylor College of Medicine in Internal Medicine and Radiation Oncology. She began her career as an Assistant Professor at The University of Texas MD Anderson Cancer Center in 1996 and has advanced to a Professor of Radiation Oncology in the Section of Gynecology. She is a physician specializing in the treatment of gynecologic cancers. Clinically, she is interested in the management of advanced ovarian, cervical, and endometrial cancers and the use of advanced radiation techniques to minimize toxicity.

In addition, Dr. Jhingran is heavily involved with the Radiation Therapy Oncology Group (RTOG) and Gynecologic Oncology Group (GOG) in the development of patient care studies to treat gynecologic cancers and is the national Principal Investigator of several accruing studies including a phase III study in cervical cancer. Dr. Jhingran travels extensively internationally for cancer education. She is passionate about women’s health issues and especially as it relates to developing country’s efforts to establish improved health care for the general populace, not just the financially able.